Below, you will find links to the current Cemetery Schedule of Fees and the forms that are required to be completed in order to arrange an interment in Cullompton Cemetery whether this is a new grave space or the reopening of a family grave.  It should be noted that the required forms and payment is to be received by Cullompton Town Council no later than 24 hours prior to the interment taking place.

The extension to Cullompton Cemetery has gates installed and a public ceremony to dedicate the gates took place in September 2015.  The ceremony was led by the Reverends Ed Hobbs of St Andrew’s Church and Glen Graham of the Baptist Church.  The gates were constructed using drawings made by Emily Nash, formerly of Cullompton Community College, as part of her GCSE Art project and capture the rolling hills surrounding Cullompton; a plaque has been engraved and installed on the central gate pillar giving Emily the credit she richly deserves.

The extension to Cullompton Cemetery is a £300,000 project and will extend the life of the cemetery well into the next century and local people are already being buried in the first area named Camellia.  There is a separate area for cremated remains named Magnolia and an area specifically for children named Primrose.  A new, accessible, path has been installed from the car park and the access from the new Cemetery to the old has been improved.

Former Town Clerk, Judy Morris, said “The extension to Cullompton Cemetery has been long in the design and construction stages but has now been opened and the new gates make a particularly impressive entrance to it.  We are going to create a Cemetery that is a fitting place for those who have passed and for those who mourn them.” 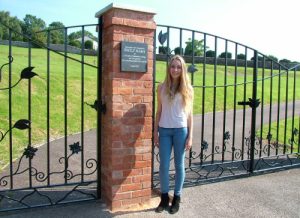